Create Functions To Manipulate An Image In Haskell Assignment Solution.

Objective
Write a program that allows users to manipulate images in Haskell language.

In this part of the exercise, you will build a small graphics library. Pictures will be represented as functions from 'Point's to values: -}
type Picture a = Point -> a
{- where a Point is an (x,y) coordinate: -}
type Point = (Double, Double)
{- 'Picture's are parameterised by the type of data that can appear at each coordinate. For example, to represent pictures where we only care whether a pixel is set or not we might use the type:
Picture Bool
we will use this type as a type of 'masks' for filtering other pictures. We could think of these as pictures that have two colours: True for black and False for white (or the other way round -- until we render them, these pictures are only in our heads). -}
{- For 'real' images, we want every point in the coordinate space to be associated with a colour. We will represent colours as their RGB components, with an Alpha channel for transparency. The type for representing colours with transparency is: -}
data RGBA = MkRGBA { redChannel :: Double
, greenChannel :: Double
, blueChannel :: Double
, alphaChannel :: Double
}
deriving Show
{- where I have named the fields for documentation purposes. Each channel is only meant to take values between 0 and 1, and we'l have to be careful to make sure that it stays that way below.
A colour image is now represented as a value of type:
Picture RGBA
Expanding out the definition of 'Picture', we see that a picture isa function from (x,y) coordinates to RGBA colour values.
Let's give ourselves some colours: black, white, red, green, and
blue. Note that all these colours have the alpha channel set to 1
-- they are fully opaque. -}
Screenshots of output 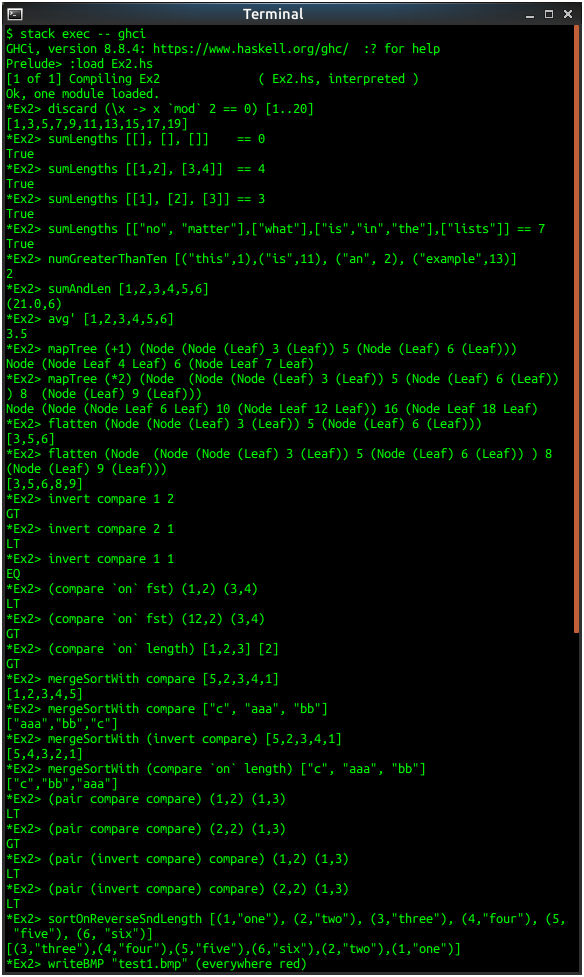 Program to Create Functions To Manipulate An Image In Haskell Assignment Solution.
submit your homework