There might be various reasons that may make you struggle with your algorithm assignment. It can be because of a tight schedule of your college. Whatever your reason may be, you can find support with our algorithm assignment help. With our help with algorithms design homework help, you can get better grades in your term and also understand the most crucial aspect of computer programming. So, if you ever want help with algorithms programming assignment, we are just a text away. All you have to do is to place your order with us, and we will deliver your algorithm homework help solutions before your deadline.

There are a plethora of reasons that may make a student struggle with algorithm assignments. It can be because of a hectic schedule, inadequate knowledge, or extracurricular activities. Whatever your reason is, you can find relief in our algorithm assignment help.

We have hired professionals who have the expertise and knowledge of designing algorithm assignments. Let us first understand what an algorithm is before we discuss why you should opt for our service.

Big O refers to the upper bound of an algorithm. e.g., if an algorithm needs time of the order of n in the best case, and of the order of n2 in the worst case, then it is O(n2). A function f(n) is said to belong to the set O(g(n)) if there exists a constant c such that f(n) is less than cg(n), for sufficiently large n.

Ω notation, in this case, will be Ω(n) as Ω is the lower bound for the best case. A function f(n) is said to belong to the set Ω(g(n)) if there exists a constant c such that f(n) is greater than cg(n), for sufficiently large n.

Θ notation bounds the algorithm from both the upper side and lower side. e.g. if f(n) is the complexity function of the algorithm, g(n) is a function and c1 and c2 are two constants such that for sufficiently large n, c1g(n) < f(n) < c2g(n) then g(n) belongs to Θ (f(n)) limit of the algorithm.

Arrays are sequences of elements with each place in it identified by its index, in absolute access.

A list is a sequence of elements with each place in it identified by its successor or predecessor, in relative access. Lists include elements called nodes. These may be linked singly or doubly or cyclic. The links can be implemented as pointers.

Searching for an Item in an Array or List

Now the Array is sorted in increasing order.

In this sort, we divide a list into two half lists. Then in recursion, each half is divided into further halves until atomic units can not be further subdivided. Then all units are merged two at a time in sorted order, each unit getting up to two atomic elements. Then again each resulting in two units are merged, each getting up to four elements each. This continues till all combine to form one unit. Its complexity is nlog(n).

Searching in a Graph

A graph is a set of vertices (called nodes) and lines (called edges).

it covers all nodes at the same level before going to a node at the next level. It uses a queue for moving first in first out. Its procedure is

A − Visit the next unvisited node at the same level. Mark it as visited. Display it. Insert it in a queue.

B − If no unvisited node at the same level is found, remove the first node from the queue. Go to the next level of this node

C− Repeat Rule A and Rule B until all nodes are visited and the queue is empty. 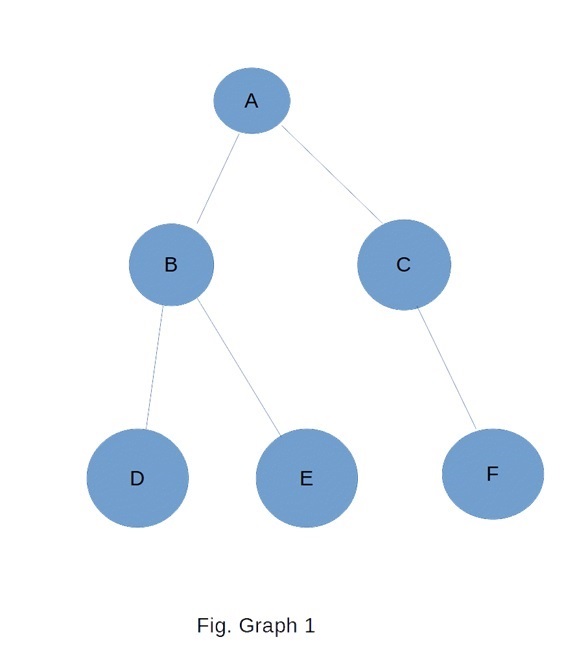 Directed acyclic graphs can be sorted topologically. The nodes are ordered in a sequence, such that for every adjacent pair (u,v), u appears before v in the sequence. There can be more than one solution for a graph. For example, in Fig. Graph.2, two possible solutions are A, B, C, D, E, F and A, C, F, B, C, D.

A weighted Graph is similar to an ordinary graph with a weight added to each edge. We may need to find the shortest paths with the lowest cost or lowest weight in a weighted graph. The sum of the weights of all edges in this path should be minimum

In a weighted digraph with possibly negative weights, the minimum distance from a source node to all other nodes can be found. In this, we first give weights infinity to all nodes except the source node. we start with the source graph and compute the weight of each node adjacent to it. Then we go to the next node and again compute the weights of all remaining nodes. If the new weight of any node is less than its previous value, we keep the new low value for that node. If there are n nodes in a graph, this process will be repeated n-1 times. Sometimes a negative cycle may be discovered. In this case, the shortest path is not possible.

we assign weight 0 to the starting node. disconnect all edges. join all nodes adjacent to this node. Take the node with the lowest weight of these. Join all its adjacent nodes, except the edge that creates a cycle. Then again take the node with the lowest weight and repeat until all nodes are joined. If while joining a later node, the new weight of an adjacent edge is found less than its old weight, replace the old weight with the new weight. For example, in Fig.Graph.4 if we start with node A, then join adjacent B and F. Now B has a lower value so we join BC. Next, F has less value 6 so join FE. Now C has a lower value so CD. Now ED gives lower value so remove CD and join ED